So you have your Next-gen cool Web 2.0 application ready! You have tested it on your LAN environment and on your high speed internet connection – all seems ok and you are ready to deploy it in the ‘real world’. A few hours later, you get feedback that your application does not perform well on slower connections. That hurts!

Now there are many tools that let you simulate slow network connections. Out of them, what caught my attention is a nice Firefox browser plug-in that ‘effortlessly’ lets you simulate different speeds of Internet connection and lets you view the effects of slow speeds on your application. The plug-in is called Firefox Throttle.

Firefox Throttle is an extension that allows you to control download/upload rates and monitor current bandwidth utilization. Amongst other features, what I liked the most was that it lets you throttle localhost connections as well. Cool! Here’s a screenshot of the plugin in action. 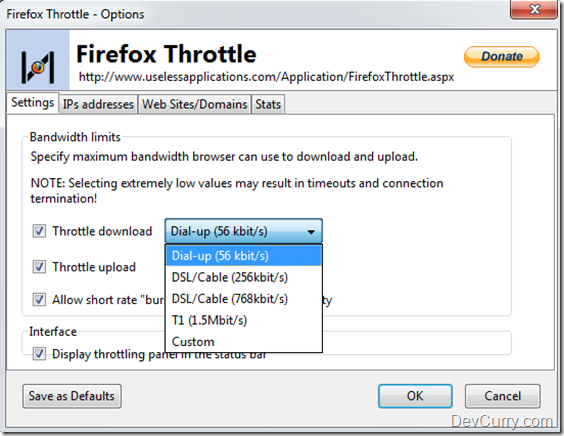 The plug-in shows the current bandwidth utilization indicators in its Status panel as shown below and lets you quickly turn on/off throttling.

You may also want to check out Sloppy

Thanks for this! I'm right in the middle of exactly this situation.

I wanted to tell you that me love this mix of topics on your blog--You rock dude!

Oh wow that makes a lot of sense dude.

Unfortunately, this is a windows only plug in.

Excellent! Exactly what I've been searching for!

Look at wanem. It can do even more sophisticated things. You burn it to a CD, drop it in a spare server and reboot. It then acts as a router. As such, it supports any platform that can do tcp/ip.

Is there something like this available for linux so that real developers can use it also? ;)

wanem looks good! Thanks for sharing.

Disclaimer: I have not tried the tools for Linux and MacOS..picked from http://news.ycombinator.com/item?id=1480778

I needed something like this a year ago and the network guys could not help me but I'm sure I will be needing it again.

Charles Web Proxy provides a nice cross-platform tool for analyzing web traffic and can throttle every HTTP-communicating application on your system, not just Firefox.

For-pay, but an essential tool

Wow thats great, now I can remember what it was like to be on dial up. lol

But for development yes this is a great tool! :)

Great tool, just what i needed, i used Fiddler to simulate modem speed, but with it i couldn't set speed only modem default.

i can't find the add-on anymore?!

Is there a version of Throttle plugin that works with Firefox 18?

Nice article ! Do you want to increase your browser speed , use the following steps :