Someone recently asked me if Visual Studio 2010 supports HTML 5 Intellisense. Well the answer is - not out-of-the-box but there is a tool released by Mikhail Arkhipov (Microsoft) that makes it possible (for both VS 2010 and VS 2008). Follow these steps:

Step 1: Download the HTML 5 Intellisense for Visual Studio 2010 and 2008 tool (HTML5Setup.msi) and install it.

Step 2: After the installation is over, the HTML 5 Intellisense schema gets installed in C:\Program Files\Microsoft Visual Studio 10.0\Common7\Packages\schemas\html.

Note: If Visual Studio 2010 is not installed in it’s default location (C:\Program Files\Microsoft Visual Studio 10.00), then after running the .msi, you will have to manually move the ‘html_5.xsd’ to the location where VS 2010 is installed on your machine, for the intellisense to work properly.

Step 3: Now open VS 2010 > Tools > Options > Text Editor > HTML > Validation and choose HTML 5 as the Target from the DropDown as shown below and click OK:

That’s it. Open a page and try out the HTML 5 intellisense as shown here 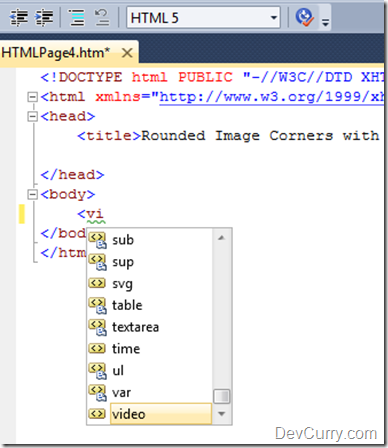 Note: AFAIK, this does not work in Express Editions.

This is sad really. Shouldn't microsoft be able to detect where VS is installed and update where the file is placed? I am sure they have the location in the registry at least 3 times.

Thanks.
If VS instance was open, you might want to close and reopen for 'HTML-5' option to appear under Target options.

Anonymous: Just like HTML 5, CSS3 is not yet final. So I suppose, the VS team 'maybe' targetting it for an SP1 release.

By the way, you can always create your own custom CSS3 intellisense schema. Get some clues here

How to create custom CSS intellisense schema in Visual Studio

Nice work.To improve visitors to your site,you can submit your links in http://codehunts.com