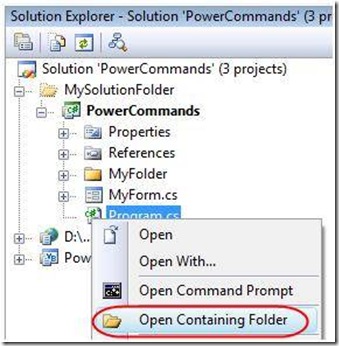 If you’re using Visual Studio 2010, Microsoft has created a new version of PowerCommands. It can be downloaded from here. This is a great addition to Visual Studio.

Malcolm Sheridan is a Microsoft awarded MVP in ASP.NET and regular presenter at conferences and user groups throughout Australia. Being an ASP.NET Insider, his focus is on web technologies and has been for the past 10 years. He loves working with ASP.NET MVC these days and also loves getting his hands dirty with JavaScript. He also blogs regularly at DotNetCurry.com. Follow him on twitter @malcolmsheridan
Posted by Malcolm Sheridan