Using MvcScaffolding Packages to Generate Repositories for your LoB Applications

ASP.NET MVC’s tooling support goes a long way in making it a LOB Application friendly platform. However the default Controller scaffold contains direct references to the DBContext. This is a little smelly when it comes to separation of concerns and can often lead to ending up with ‘fat-controllers’. Instead, if our Scaffolder could generate a Repository Interface and its corresponding implementation, our LoB apps would not only achieve better ‘separation of concerns’ but also becomes more testable. The MvcScaffolder extension that comes as Nuget Package enables us to do precisely this type of scaffolding. Let’s see how we can use it in a simple Contact app.

Step 1: We start off by creating a new MVC 4 Application in Visual Studio. We use the Basic Application template for now.
Step 2: Install the MvcScaffolder using Nuget Package Manager 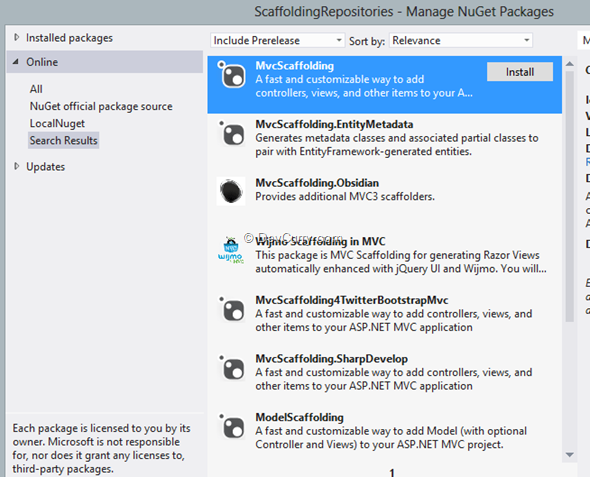 This will install the T4Scaffolding dependency as well.


Adding a Model entity and generating the CRUD Screens

Now that we have the MvcScaffolding package installed we are ready to setup our Model and then run the scaffolder on it.

Step 3: Add the following Contact class in the Model folder and build the application.

Step 4: Right Click on the Controller folder and select Add Controller. It brings up the standard Add Controller dialog but if you look at the DropDown, it has two additional options thanks to MvcScaffolding. 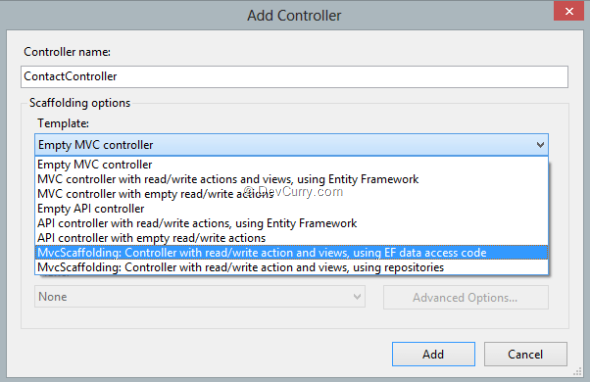 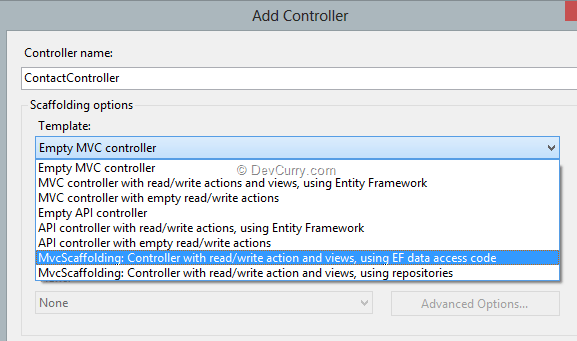 Step 6: On completion of the Scaffolding process you will see the following files added to your solution 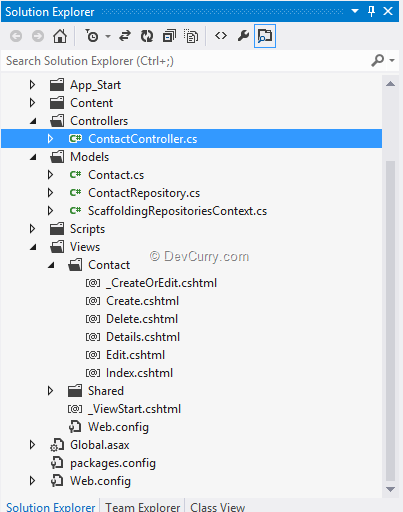 Views – Views has the standard CRUD views generated. One thing to note here is that there is a partial view called _CreateOrEdit.cshtml. This view as we will see shortly, is common to both Create and Edit screens and hence separated out into its own partial.

The generated views have one minor gotcha, as in the script references for jQuery Validation are added at the top of the Create and Edit views.

Our jQuery references are added at the bottom of the _Layout.cshtml. As a result of this the jQuery Validation scripts fail when trying to load ‘before’ the jQuery script itself.

The solution is simple.

The Script section is important because in the _Layout.cshtml we have the following code

With the Script references fixed, we are ready to run the application.

When we run the application, now we should be able to save data to the database 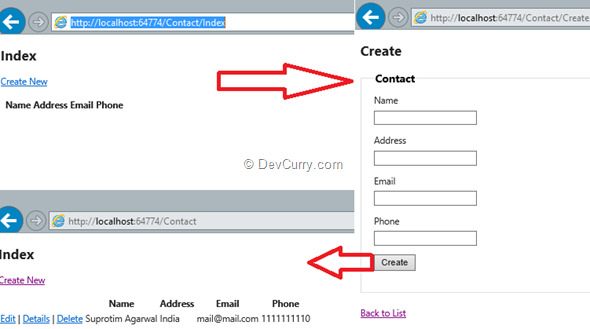 Neat! So our application is up and running as if it were built using the default MVC Scaffold tool. Time to dig in and see what’s different with the MvcScaffolding extension.

Now that everything is working fine, let’s pop the hood and see how things are running. First up the repository.

The ContactRepository.cs has the Interface and the implementation for Contact Repository.

Note that the IContactRepository inherits from IDisposable. The implementation uses an instance of the ScaffoldingRepositoriesContext object that uses EF to persist data.

There is an interesting Repository method called AllIncluding and as we can see in the code below, it can accept a parameter consisting of an array of Model properties. This way we can limit the amount of data loaded if required. It can also be used for excluding Navigation properties etc.

The InsertOrUpdate method checks if the Id property has the default value, if it does, it saves it as a new entity. If the Id already has a non-default value, attempt to Update the entity. 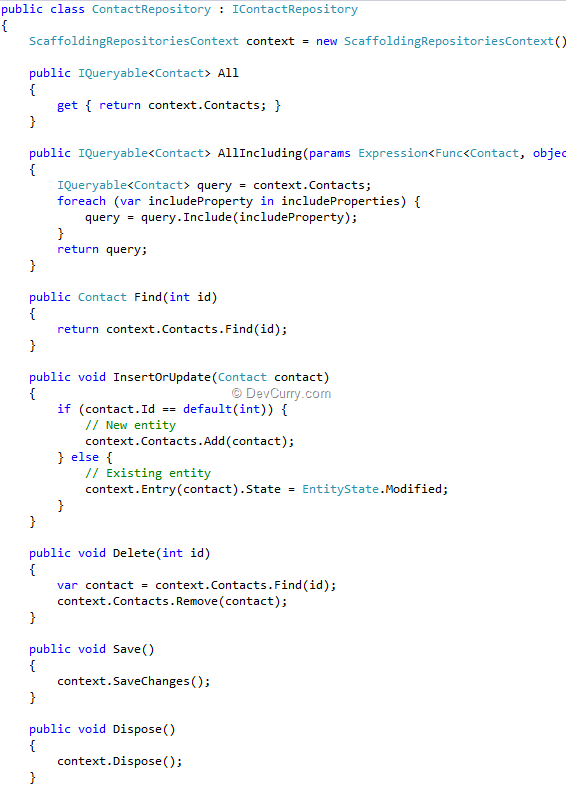 The ContactController is also generated a little differently, as in, instead of an instance of DbContext, we have a direct assignment of an Interface to its concrete class hardcoded in the constructor.

To resolve this, we have to introduce an IoC Container to inject the dependency instance into the controller via the constructor. At this point, we can go ahead and integrate our favorite IoC container/DI framework as we want.

The MvcScaffolding package also has the ability to let you create your own Scaffolds. It creates a bootstrap set of files when you use the following command at the Package Manager Console

What this does is, it adds T4 templates required for Scaffolding into a CodeTemplates folder. All T4 files are in a folder by the name of the scaffolder you created (MyScaffolder). This will generate the file ExampleOutput.cs as follows

Essentially the Scaffolding plugin is not only helping generate CRUD screens, but if you have repetitive code that you want to automate, you can very well use the Custom Scaffolder feature to make life easier for yourself.

MvcScaffolding is a nifty extension that adds additional scaffolding capabilities to the default MVC tooling that comes out of the box.

Caveat is that it’s not an officially supported Microsoft plugin. It was developed by Steve Sanderson and Scott Hanselman and you can find more information on Steve’s blog at http://blog.stevensanderson.com/?s=scaffolding

Download the entire source code of this article (Github)

How do we get the "MvcScaffolding Controller with read/write actions and view, using repositories"?