jQuery 1.7: What happened to live and die?

In case you did not notice, in jQuery 1.7, the .live() and .die() methods have been deprecated. That does not mean you cannot use them but .on() and .off() are now the new and recommended ways to attach event handlers! 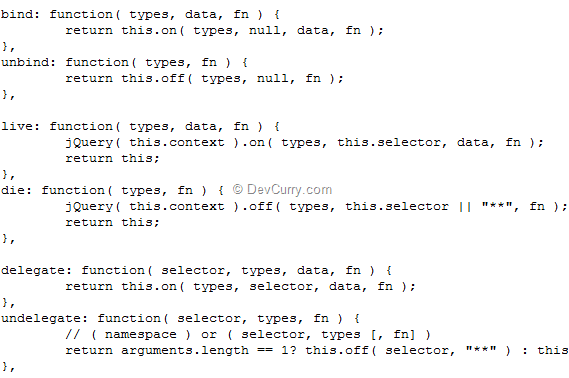 Why were .bind() and .live() deprecated?

The jQuery documentation states: For earlier versions, the .bind() method is used for attaching an event handler directly to elements. Handlers are attached to the currently selected elements in the jQuery object, so those elements must exist at the point the call to .bind() occurs. .on() provides a more streamlined, simplified and unified way of attaching events.

One of the biggest issues with .live() was performance. After using the .live() in your code, one would eventually end up attaching plenty of listeners. With .on(). since you have to specify a parent container, only one listener gets added.

StackOverflow user Interstellar_Coder has put forward a nice list of drawbacks of .live()
Changing from .live to .on()

Here’s an example of changing your existing .live() code to .on() 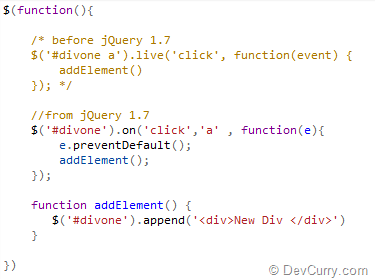 You may also want to read jQuery 1.7 Custom Events Using .on Method

Thanks a lot for this informative post and highlighting the features jquery 1.7 is having.